Xi’an is mostly popular for its breathtaking collection of underground Terracotta Warriors, but the city is so much more than that. Xi’an has an incredibly rich history filled with courtesans, merchants, emperors, poets and warriors of all sorts. Explore the city’s pagodas, numerous museums, the spectacular City Walls, and the beautiful Muslim Quarter. The article is written for asiapacifichotels.com.au.

This magnificent structure can be compared to the Statue of Liberty or Eiffel Tower – it’s definitely the most significant and spectacular building in the city. It was built more than 1,300 years ago when Xi’an was a prosperous capital of China governed by the Tang Dynasty. The pagoda is 64 meters high and consists of 7 layers. It is said that it was built to commemorate monk Xuanzang who traveled to India to learn Buddhism there and came back with the sacred knowledge.

This is definitely the number one attraction in Xi’an, so you shouldn’t miss it even though it’s become a real tourist bait over the years. It is part of the UNESCO World Heritage and features more than 8,000 terracotta horses and warriors as well as 10,000 weapons made of bronze. All these statues and weaponry were created as funerary goods for the 1st emperor of the Qin Dynasty, Qin Shi Huang.

Rent a bike and head to the magnificent City Walls of Xi’an. It’s a great place where you can take a step back in time and enjoy the incredible military fortifications that have survived through thousands of years till nowadays. Wait for the warrior parade in the late afternoon – it’s the most breathtaking experience! 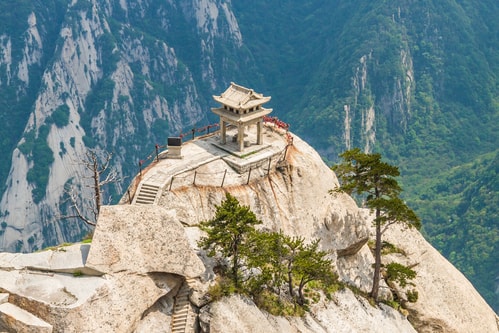 If you don’t mind traveling around Xi’an a bit, then Mount Huaashan is your perfect choice. It is one of the 5 biggest and most beautiful mountains in China and is also quite dangerous. Head to the 2,155-meter mountain and explore its spine-chilling walkways and steep slopes with breathtaking views. Chang Kong Plank Road is especially popular among thrill-seekers as it is a plank walk that’s attached alongside a vertical cliff more than 1 km above the ground.

If you wonder how people have lived in China for thousands of year – head to the Ma Ming Gong Lu and explore its incredible cave dwellings. This village still has inhabitants who have preserved the ancient way of life. They are a welcoming bunch and you can look around for as long as you want. Spend a night at one of the caves with the local family to get the first-hand experience of living the ancient way.

If you want to try something truly delicious, head to the Muslim Quarter of the city where traditional Chinese cuisine is mixed with Muslim influences. The flavors are unforgettable! It’s a vibrant street with food being prepared outdoors – it’s great to just walk by and enjoy the vibrant mix of colors and smells. Locals insist that yangrou paomo is a must-try. Grab some fruit on a stick as a dessert.